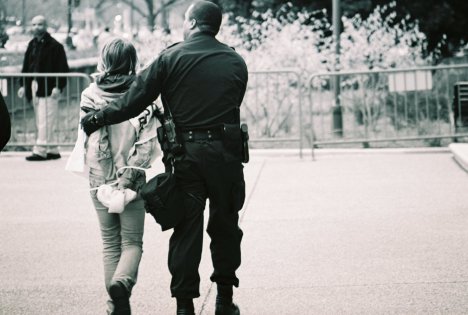 When I was about 6, I went with my mom to the movie rental section of Kroger (Remember that?!). Of course, they also sold all sorts of candy for the gluttonous consumer, and they put some out on the lowest shelf, less than 4 inches off the ground. Now, my mom rarely bought candy for us growing up, and if she did, it was because she probably had a coupon. So, fully aware that my mom would never buy it for me, and I had no coupon to show for it, I grabbed as much as my little hands could hold. I soon realized that I was in a bit of a predicament, as I was wearing tights, which meant I had zero pockets. So, I did what any other kleptomaniac wearing tights, besides Robin Hood, would do…I stuffed them down my pants.

Just then, my mom came cruising casually down the aisle, as did the cashier right behind her. I felt pretty smug in my lumpy tights and took a step forward. Well, now would be a good time to mention that another nice thing about my mom is she was always kind enough to buy us clothes significantly larger than our size so that we could grow into them. She did an excellent good job, considering I still probably wouldn’t be able to fit in some of them to this day, even after having 2 kids. So, as I stepped forward, candy slid down my legs, out of the pant holes, and plopped right onto the floor. Before I could even think of an escape plan, my mom was already giving the look that sentenced me to years of torment. The rest is history.

I was fiercely covetous as a child, probably because, well, I was a child, and also because my parents were wise enough to never spend money on things that were simply unnecessary. Thankfully, as time passed, I naturally became more aware of the pettiness of material things, and became more satisfied with my life.

However, in recent years, the influx of social media, namely Facebook and Pinterest, I am bombarded and flooded daily by images of what my life should look like, and what I HAVE to have to be happy. The coveter in me has reared its nasty head back up and I feel as wanting as I did when I was 6, though now I covet refined things like Anthropology-type homes, fancy vacations, hipster toddler clothes, etc. Once a coveter, always a coveter.

And then I just find myself discontent. What is the problem in discontentment? Well, two things:

1) God hates it, because it shows that I am not fully satisfied with Him and what He has ordained for my life, and I don’t trust Him and His love for me.

2) It leads me to be cynical of the people who do have what I want.

There was one major realization though, that allowed me to exercise contentment:

The more I saw, the more I coveted.

So, there are two habits I practice to safeguard myself when I am tempted to covet.

1) I remind myself when I see something that makes me covet that what I see online is mostly an illusion. Sadly, people are not as happy as they look online, and naturally, we only pick and choose what everyone else sees. It’s not wrong…it’s just the fact that no one wants to see me mopping the floor or washing dishes in my PJ’s, and I’d prefer not to show anyone either. I saw a couple at a restaurant take pictures of their meals with their respective smart phones. The rest of the time, they were both just sitting there on their phones ignorant of the other partner. I’ve also seen moms take pictures of their kids at the park, and then just sit back down and play with their phones the rest of the time. What we see on our screens is a filter of a bigger, more complicated life.

2) I also realized that I DO have control over what is set before me. There is a button on Pinterest I’ve learned to love, and her name is “Unfollow Board.” Never seen her before? Well, you can recognize her because she looks like this:

I want to be satisfied with the life God has given me, with its perfect imperfections…and to be more satisfied with Christ Himself…because true contentment isn’t having what I want, but holding Christ as my highest treasure even if I have not.

...is a blog where my wife and I inform you on the interesting comings and goings of our lives. We were married August 7th, 2010 and have a cat.